Gonzo’s Quest is one of the most popular slot games you will find at online gambling sites and is a firm favourite in the NetEnt gaming library. Although this game was released in 2011, it is still incredibly popular is widely regarded as one of the best online slots. This slot game takes you along with Gonzo on his quest to find the lost, golden city of El Dorado and features a cool Mayan theme. Gonzo’s Quest was the first game from NetEnt to feature the exciting Avalanche feature and has since developed a cult following because of this.

Are you ready to join Gonzo on his quest? For players who want a medium to high variance slot game with lots of bonus features to help you win big, then this is the game for you. Carry on reading to learn everything you need to know about Gonzo’s Quest and what online casino is best to play at. 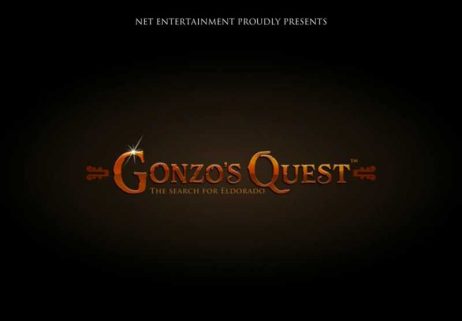 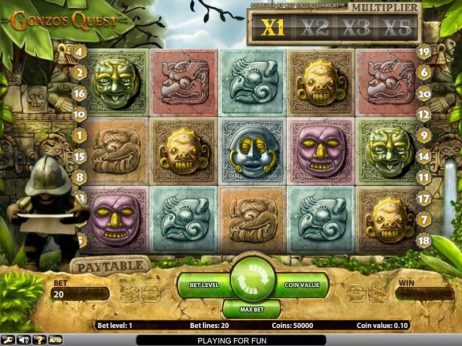 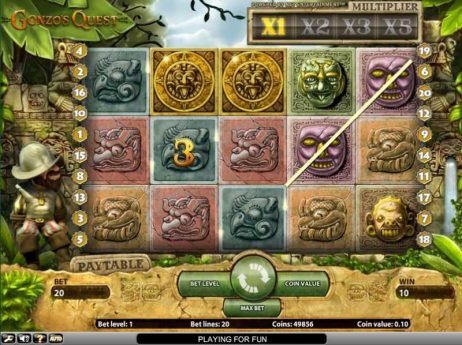 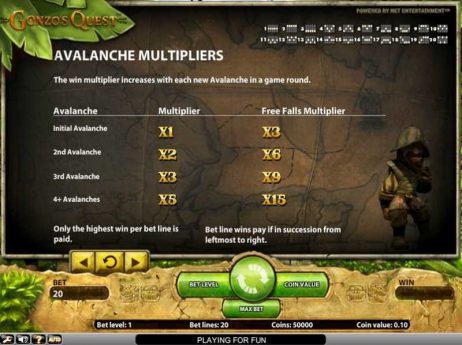 This 5-reel, 3-row slot game features 20 paylines and an array of brilliant bonus features. You can customise your stakes by coin size and paylines. Coins can be set up from as little as 1p to 50p and you can have up to £5 worth of coins on each payline. Each spin will cost you between 20p and £50.

In this game, you will find yourself in El Dorado which has been overpowered by the surrounding jungle. There are nine symbols in total: wild, scatter and seven various carvings of animals and faces that are easily recognised by their differing colours.

Gonzo’s Quest has an RTP of 95.97% and this is average for slot games at online casinos. This is a medium to high variance slot game and so it does not pay out too often but when it does, the payouts are usually larger. You will find that most big payouts happen during the special features rather than the base game.

The maximum win in the base game is 2500x your stake, which can be won with any bet size. You will need to land the blue face carving symbol on your reel five times and this is with the 1x multiplier applies. However, with the 15x multiplier in the Free Falls feature which you can find out more about below, this jackpot rises to a huge 37,000x per free fall. Want fast access to your winnings? Luckily, you can play Gonzo’s Quest at many of the best instant withdrawal casino sites.

Gonzo’s Quest offers an autoplay feature to make the game simpler and faster to play by setting your wager and spins then letting it play automatically. You can also choose the Max Bet button to select all lines and speed up the gameplay.

You will want to look out for the question mark symbol as this is the game’s wild symbol. Like standard wild symbols, it will replace other symbols on your reels to help form new winning combos and help to increase the chances of you getting a cash prize.

The big feature that makes Gonzo’s Quest incredibly popular is the avalanche feature. At the top of your screen, you will spot the Avalanche Multiplier and this lets you know what multiplier is being applied to your game. With each avalanche win, the multiplier will increase. You will start off with a 1x multiplier with your first avalanche and this can increase up to a 5x multiplier after your fourth avalanche.

Another exciting feature in Gonzo’s Quest is ‘free fall’. When the free fall scatter symbol appears simultaneously on the first, second and third reels, you will be awarded 10 free falls. The avalanche feature also works here too. With the first avalanche, you will be awarded a 3x multiplier and this rises in increments of 3 until you reach the fourth avalanche where the multiplier jumps to 15x. Landing a further three free fall symbols will get you an additional 10 spins.

Many of the top casino welcome offers reward free spins or bonus funds that new players can use to spin the reels of Gonzo’s Quest.

Gonzo’s Quest is optimised for mobile play. It will adjust to run smoothly on both mobile NetEnt casino sites and native mobile casino apps. You can enjoy spinning its reels on iOS and Android casino apps, without sacrificing game quality. It works just as well on tablet devices too, so it’s a great slot to spin on the go.

Gonzo’s Quest is a video slot game known for its high-quality design and graphics. Behind the reels, you will see Gonzo is in the middle of the ancient, lost city of El Dorado, which is in the Amazon Jungle. The symbols on the reels capture the Mayan/Aztec theme of this game as they look like ancient carvings in stone.

You will also spot the explorer Gonzo to the side of your reel and he livens up each time you get a win. As you spin the reels, you will hear lots of jungle animal sounds in the background and lively music plays when you get a winning combination. Despite being one of NetEnt’s older titles, Gonzo’s Quest still looks and sounds fantastic and can be played at many of the best new slot sites.

Most slot fanatics will have already played Gonzo’s Quest, but if you haven’t, then this is a game you won’t want to miss out on spinning. NetEnt has created an iconic game here with brilliant graphics and thrilling bonus features that keep players entertained for hours on end. This is a jam-packed video slot game and one of the best to try anywhere online. 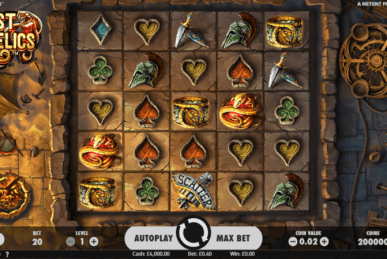 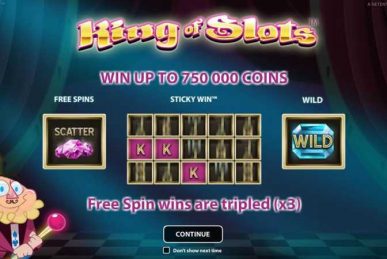 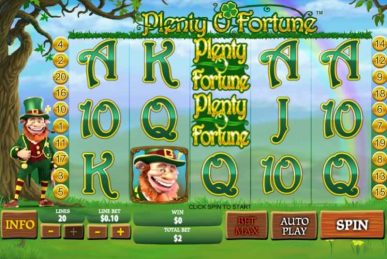