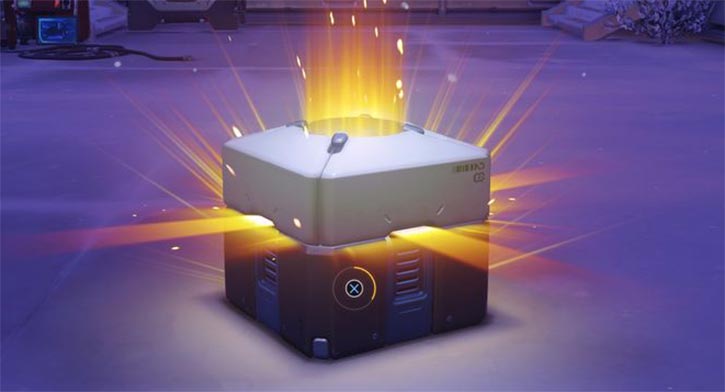 Exploring the links between loot boxes and online gambling

Loot boxes have been a pretty hot topic over the last few months, but if you’re not familiar with video games you may be wondering what all the fuss is about. Let’s take a look at what loot boxes are, why they’re in the news and how they’re connected to online gambling.

What are loot boxes?

Many popular games, such as Counter-Strike: Global Offensive (CS:GO), Overwatch and Dota 2, feature in-game loot boxes that reward players with items like weapons and character skins. In some games, players can access these virtual treasure chests as they make their way through the gameplay. However, the easier, faster and more popular way to access these rewards is to purchase loot boxes using real money. This may all sound fairly innocuous, but loot boxes have hit the headlines in recent times for all the wrong reasons.

The chief reason behind the controversy is the proposed link between loot boxes and gambling. Many observers consider loot boxes to be a form of gambling, as players are paying money to win prizes based on chance, similar to some of the new online slot games available at new casinos. What’s more, the odds of a player receiving a valuable prize aren’t particularly favourable and, in most games, the odds aren’t even published.

The lottery-based nature of loot box purchases, along with the low likelihood of getting a top prize, has been accused of encouraging players to buy more in search of better rewards. Critics and gamers alike have referred to the purchasing of loot boxes as addictive, while video gaming itself has also come under increased scrutiny for its addictive nature.

One of the main areas of criticism focuses on the age of players. Games like CS:GO and Overwatch are very popular among teenagers and children, and people have claimed these titles are encouraging underage gambling. Of course, you must be 18 years old to legally gamble in the UK, but real money loot boxes have no such age restrictions. Some websites have even begun offering “real life” loot boxes, which can be purchased online and contain mystery items such as iPhones and trainers. Several prominent YouTubers have been criticised for promoting these products to children.

It’s not just minors who are being hooked in by loot boxes, though. There is also concern that loot boxes encourage behaviours reflective of problem gambling in adults, with some spending as much as £700 a month on loot boxes. This has resulted in members of the public, problem gambling organisations and politicians urging the UK government to regulate loot boxes.

It’s not just in-game purchases that have ruffled feathers, either. Loot boxes have also been criticised as a source of virtual items used in skin gambling. Skin gambling, also known as skin betting, is where players gamble skins for real money on third-party websites. A skin is an item that changes a character or weapon’s appearance and has no effect on gameplay.

Skin betting is most commonly associated with CS:GO, after the game introduced cosmetic skins in 2013. Steam, the platform on which CS:GO and many other popular games run, offers players the chance to trade, purchase and sell skins on the Steam Marketplace. Players can fund their Steam Wallets with real money, but these funds can only be used as virtual credit and cannot be withdrawn as real money.

As the popularity of skins increased, rare skins became more in-demand and rose in value. This led to illegal and unregulated third-party websites offering players the chance to buy and sell popular skins outside of Steam. Through these sites, which are not held to the UKGC’s standard for promoting responsible gambling, players could purchase and sell skins for real money, using payment systems like PayPal and Bitcoin.

Following this, more unregulated sites began offering players the chance to bet on esports matches using skins as the betting currency. Some sites even let skin bettors use skins to wager on casino-style games of chance, such as roulette and coin flips.

As skin gambling is against UK gambling laws, Valve has attempted to control and prevent it, and many sites have been shut down over the last few years. However, skin gambling continues to exist in an unregulated black market that has introduced gambling to players as young as 11.

While the UK Gambling Commission (UKGC) recognises the potential risk of loot boxes, it ruled in 2017 that loot boxes do not contradict UK gambling laws, a stance that was repeated in 2018. The chief reasoning behind the position is that players do not receive real money prizes, which means loot boxes don’t break the gambling laws set by parliament. However, the 2017 statement did state that it is concerned of instances “where the line between video gaming and gambling is becoming increasingly blurred.”

Other countries have come down harder on video game developers. Belgium has banned real money loot boxes, with authorities emphasising the danger posed to children and the mental health of gamers overall. The decision came after an investigation into CS:GO, Overwatch, FIFA 18 and Star Wars Battlefront II. EA, the developer of FIFA, challenged the ruling, arguing that its in-game packs aren’t gambling as players receive a specified number of items and cannot cash out or sell virtual items. However, they eventually backed down and have now removed the option of in-game purchases for Belgian gamers.

The Netherlands has also ruled that loot boxes which reward players with transferable content are illegal, while a report commissioned by the Australian government concluded that purchasing loot boxes is “psychologically akin to gambling”.

When it comes to skin gambling, the UKGC’s stance is somewhat clearer than it is on loot boxes. In a 2017 report, the Commission stated that any site offering gambling facilities, including skin betting, requires a valid gambling licence. Unlicensed sites offering skin betting are therefore illegal and open to potential closure and penalties. The UKGC has urged developers like Valve to crack down on skin gambling sites and has also prosecuted individuals for running gambling websites linked to video games.

The future of loot boxes

The increasing scrutiny on loot boxes and skin gambling, coupled with the rulings of Belgium and the Netherlands, has already had a significant effect on the gaming industry. Some have called on developers to take action to prevent more governments from introducing potentially restrictive legislation.

A few developers have already begun making changes to their games. For example, Blizzard recently removed real money loot boxes from Heroes of the Storm. While Blizzard didn’t specify a reason for its decision, it’s speculated that it may be testing the effects of removing loot boxes on one of its smaller titles. Fortnite, a hugely popular video game among children and adults, recently announced that its loot boxes will become see through, so players know what they’re buying. EA has also started publishing the odds of in-game packs on FIFA 19, in a bid to improve the transparency of in-game purchases.

It’s likely that we will see further changes in the world of video gaming as authorities continue to research the issue. 15 gambling regulators, including the UKGC, issued a declaration in September 2018 stating that they will continue to investigate the links between gambling and video games. The UK government has also asked the public for its opinion on the issue.

All this indicates that loot boxes will come under increasing criticism in 2019, though whether more countries will follow the lead of Belgium and the Netherlands is not yet known. However, unless developers continue to take steps towards increasing the safety and transparency of the industry, particularly for underage players, then we could well see more regulation in the future.