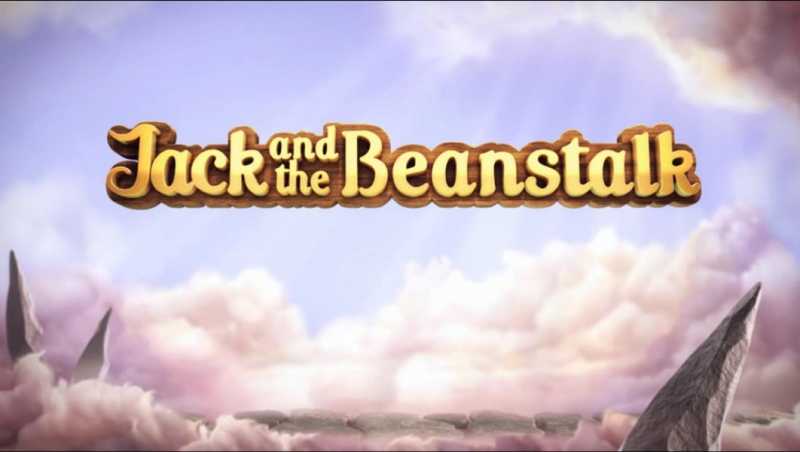 Jack And The Beanstalk

Jack and the Beanstalk is a popular NetEnt slot game that was released almost ten years ago but is still a fan favourite at online slot sites. The game features fantastic 3D graphics and is based on the children’s story of Jack who climbs a beanstalk only to uncover a giant and lots of treasure. You will have plenty of chances to grab your share of the gold in cash prizes as you spin the reels of this slot game!

Are you ready to join Jack on his adventure up the beanstalk for cash prizes? If you want a medium to high variance slot with exciting bonus features and cool graphics, then this could be a great option for you. Carry on reading to find out more about this slot game and where you can enjoy spinning its reels. 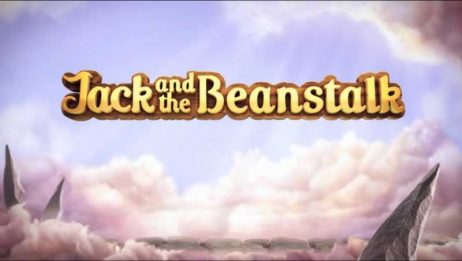 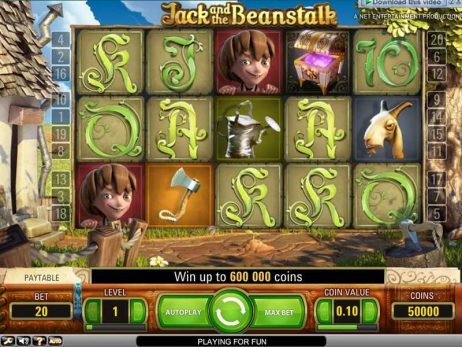 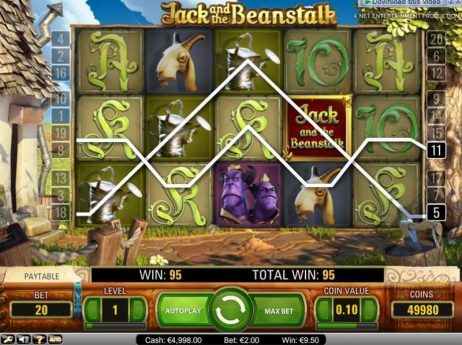 This 5 reel, 3 row slot game features 20 paylines and some great bonus features. Coin sizes range in this game from 0.20 to 100 and bets per spin range from 20p to £100. There are eleven symbols in total: wilds, scatters, Jack, Giant, axe, watering can, goat and playing card symbols.

Jack and the Beanstalk has an RTP of 96.3% which is around the average mark for online slot games. This is a medium to high variance slot game and so although it does not pay out regularly, the wins will be much larger.  The maximum win in the base game is 1000x your stake, which can be won with any bet size. You will need to land the Jack symbol on your five times to achieve this. If you manage to bag some winnings, you’ll be able to benefit from quick withdrawals at the top fast payout casino sites.

Jack and the Beanstalk offers an autoplay feature to make the game simpler and faster to play by setting your wager and spins then letting it play automatically. There is also a max bet button available to speed up gameplay even further.

There are three special features in total – a walking wild feature, free spins bonus round and Treasure Collection bonus.

The second feature is the free spins bonus round. To trigger this round, you must land three or more treasure chest scatter symbols on your reels. Players are awarded 10 free spins, plus you can get another 5 spins if you land a further 3 scatter symbols. Wins combined with wild symbols in this round will be multiplied by 3.

Want to bag some free spins or bonus funds to use on Jack and the Beanstalk? You’re in luck, as this slot is available at many of the best welcome bonus casino sites.

Jack and the Beanstalk is a mobile optimised game and can be played at loads of top mobile casinos. It will run great on mobile browsers and mobile casino apps without having to sacrifice on visual or gameplay quality. This game is also available to play on tablets and runs excellently on both iOS and Android devices.

How Does it Compare to Other NetEnt Titles?

Jack and the Beanstalk is a popular slot game from NetEnt, much-loved for its Free Spins and Treasure Collection bonus games.

NetEnt boasts many other very popular titles including Gonzo’s Quest and Starburst. Both of these games are very different to Jack and the Beanstalk,  Gonzo’s Quest is a more action-packed game while Starburst is a very simple game with no bonus features.

Gonzo’s Quest has long been one of NetEnt’s most spun titles and it’s not hard to see why! This game features fantastic, high-quality graphics that transport you to the jungle in search of lost treasures. As you spin the reels of this game, you’ll notice there is more going on than Jack and the Beanstalk. Players can look forward to wilds and a Free Fall Spins feature with increasing multipliers of up to 15x. It also features the ever-popular avalanche feature with more multipliers thrown in, too!

Starburst was released by NetEnt way back in 2012 and has become an iconic game in the library. The slot features almost no bonus features, so don’t expect increasing multipliers, mini-games, or a Free Spins bonus here. However, there is an expanding wild symbol available that can help replace other symbols to create new winning combos.

If you want a good in-between NetEnt slot from the simplicity of Starburst to the wide range of bonus features in Gonzo’s Quest, Jack and the Beanstalk is a great choice.

There are lots of great fairytale-themed slot games on the market. While Jack and the Beanstalk is a brilliant option, there are newer slot releases on the market that have better quality, more immersive graphics and animations.

NetEnt offers an array of fairytale games including Fairytale Legends Red Riding Hood. This is a five-reel, 20 payline slot game that transports you into the story of Red Riding Hood visiting her grandma and being confronted by the wolf. This game is overflowing with bonus features with seven available to play! These include three randomly triggered features, a sticky win re-spins feature, and a bonus picking games with up to 200x your stake up for grabs.

Another very popular game – this time taking inspiration from the story of the three little pigs and the wolf blowing their houses down, is the Quickspin slot Big Bad Wolf. A five-reel slot with 25 paylines, this title features some awesome graphics. Players can enjoy a Swooping Symbols feature, that removes winning combinations and replaces them with other symbols for a chance at consecutive payouts. The slot also provides the opportunity to grab extra wilds and up to 20 free spins with a 2x multiplier.

Jack and the Beanstalk is a video slot with high-quality 3D graphics that immerse you in the game as you play at it new NetEnt casinos and brand new slot sites. Behind the reels you will see Jack’s home and get a glimpse of the beanstalk while on the reels you will find lots of symbols that relate to this childhood tale theme. This includes symbols such as Jack, a goat, treasure chests, watering cans, axes and the giant, plus your standard playing card symbols.

During the free spins round Jack will climb up the beanstalk and the background setting changes. You will see Jack to the side of your reels, standing on top of clouds, and the giant’s castle looming in the background. The sound effects match the theme perfectly and sound very mystical with an orchestra playing as you spin.

The Invisible Man – If you love the story of The Invisible Man, you’ll enjoy spinning the reels of this NetEnt slot game based on the classic 1933 film. Bursting with bonus features, players can take advantage of two wild symbols, a big free spins bonus feature that awards 10 free spins, Burning Wilds, and increasing multipliers for the chance to take home a big cash prize.

Fruit Shop – Fruit Shop was released by NetEnt over a decade ago and is still one of the developer’s most popular slot games. Players will find themselves in a market with lots of suitably fruity symbols on the reels. This simple game offers wilds with double payouts and a fun free spins feature to help you get your five a day of big cash prizes.

Hotline – Hotline is the 80s themed slot game from NetEnt with five reels, three-rows, and 30 paylines. The slot can potentially have an RTP of up to 97.04% when all three hotlines are in play and features a free spins bonus round that awards seven free spins and a re-spins feature with expanding wilds.

Jack and the Beanstalk has long been a popular game in the NetEnt catalogue and it is not hard to see why. This game has fantastic graphics that immerse you in the fairytale and players will enjoy the walking wilds and free spins features where the big cash prizes can be won. This is a jam-packed slot game that still lives up to its hype.

Play Jack and the Beanstalk at One of These Top Casinos

Casushi – Players can immerse themselves in the charming Japanese themed online casino, Casushi. This casino is jam-packed with over 700 great games to check out including slots, blackjack, baccarat, roulette, poker, and live dealers. You can get started with a minimum deposit of just £10 and enjoy these games on the go from the mobile-friendly site.

Casumo – A big welcome offer awaits new players to Casumo online casino! Newbies can make their first deposit of at least £10 to receive a 100% welcome bonus up to £25. What’s more, you’ll receive 20 bonus spins to play on the thrilling slot game Book of Dead. This is a modern casino with over 1,600 incredible games from top software developers such as Microgaming and NetEnt.

Other Games by NetEnt 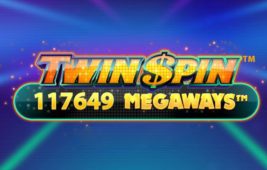 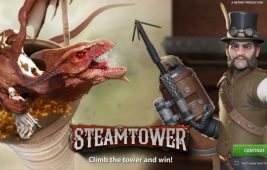 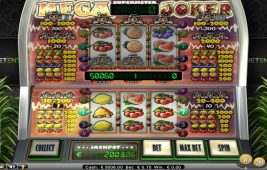