If you’re familiar with video games and esports, you’ve probably heard of Twitch. For those of you that haven’t, Twitch is a live streaming video platform which has become the world’s leading service for live gaming streaming. While Twitch is best known for its video game streams, online casino streaming has become another popular niche on the platform. Here, we dive headfirst into the world of Twitch casino streaming and give you the lowdown on how it works, the biggest casino streamers, the profitability of streaming, and why it’s starting to come under scrutiny.

How does it work?

The concept is simple: gamblers live stream videos of themselves playing online casino games while viewers simply sit back and enjoy the action. The most popular streams are of people playing online slots, but there are streamers for just about every other online casino game you can think of, including roulette, poker and blackjack. Streamers share videos of themselves playing both live casino and animated random number generator games, and viewers can interact with each other via the chat feature as they watch streams.

How did it start?

Live streaming is nothing new; the first was broadcast online all the way back in 1993. However, it wasn’t until 2008 that YouTube launched its live streaming service and made it accessible to a wider audience. Even then, video game streaming didn’t really take off until Twitch was launched in 2011. This site was designed specifically for this purpose and provided a niche for video game streamers and fans.

Twitch quickly exploded in popularity, reaching 45 million unique viewers by 2013 before Amazon bought the site for $970m in 2014. Now, Twitch attracts over 15 million daily active users and over 100 million viewers per month. While video game streams are still far and away the main type of content on Twitch, online casino streams have gradually become more popular since Twitch made casino and gambling a category in 2016.

The increasing popularity of casino streams mirrors the growth of the online casino industry itself, which has exploded in the last decade or so due to technological advances, improved internet speed and the rise of smartphones. The top casino streamers now regularly attract thousands of viewers to their streams and the biggest names have total view counts well into the millions.

Why do people watch streams?

If you’re not familiar with the world of Twitch, you may be wondering what’s so appealing about watching other people play games. Well, there are a few reasons. One of the main pros for casino fans is that they can learn about new games before they play for themselves, as well as getting a taste of the online casinos that streamers play at.

Casino channels stream all sorts of games, which is a good way for fans to discover new casino sites, almost like a virtual tour of different games. While slots are based on luck, other games like poker rely on an element of strategy and skill and some viewers may watch streams to help develop their own strategy.

Twitch offers more than just video streaming, though. Viewers can also interact with each other through the live chat feature as they watch live streams. Whether viewers chat about new games, casino strategy, or day-to-day life, this live chat feature creates a sense of community on the site. Casino fans have been able to chat on forums for years, but Twitch lets people talk and socialise in real time. Of course, viewers also often have preferred streamers which they find entertaining, similar to how people follow particular YouTubers.

Who are the biggest Twitch casino streamers?

Anyone can set up a Twitch account and start streaming, but only a select few casino streamers have managed to gather large followings. Here are some of the biggest names in the business:

CasinoDaddy was formed in 2016 and is run by three brothers and has amassed over 94,000 followers, making them one of the biggest names in Twitch casino streaming. The majority of their videos are of online slots, and with over 1,2000 uploads, CasinoDaddy is one of the most prolific Twitch casino channels around. 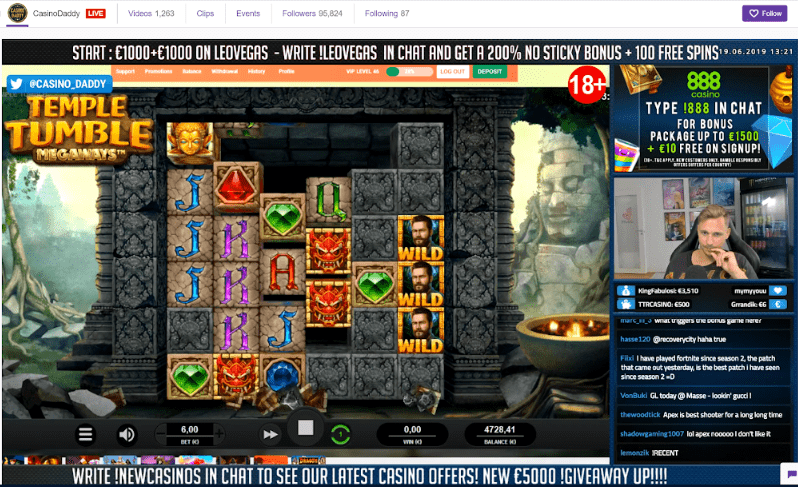 Another famous Twitch casino streamer, LetsGiveItASpin has been around since 2015 and uploaded over 350 videos, attracting more than 26,000 followers. As the name suggests, the content is mainly slots-focused, but there are also streams for other games like live dealer poker and blackjack. 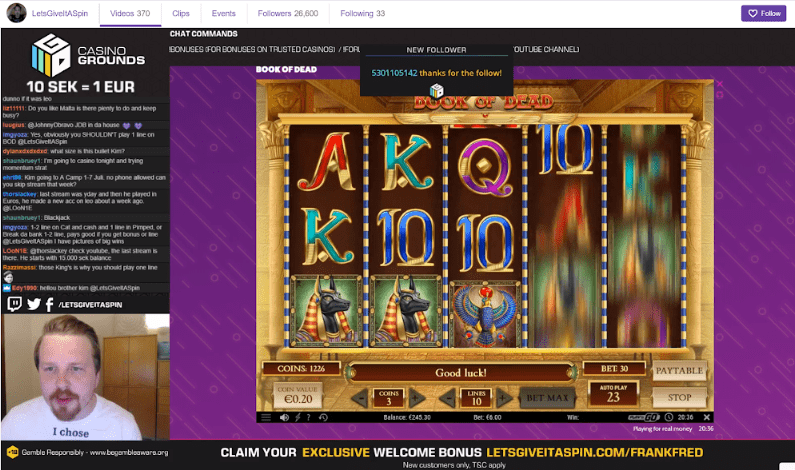 RocknRolla is one of the newer Twitch casino streamers, having joined in 2018, but has already racked up over 23,000 followers and streams games like roulette and dream catcher as well as slots. While he doesn’t stream as regularly as the likes of CasinoDaddy and LetsGiveItASpin, he’s become particularly popular due to his excitable reactions to landing a win. 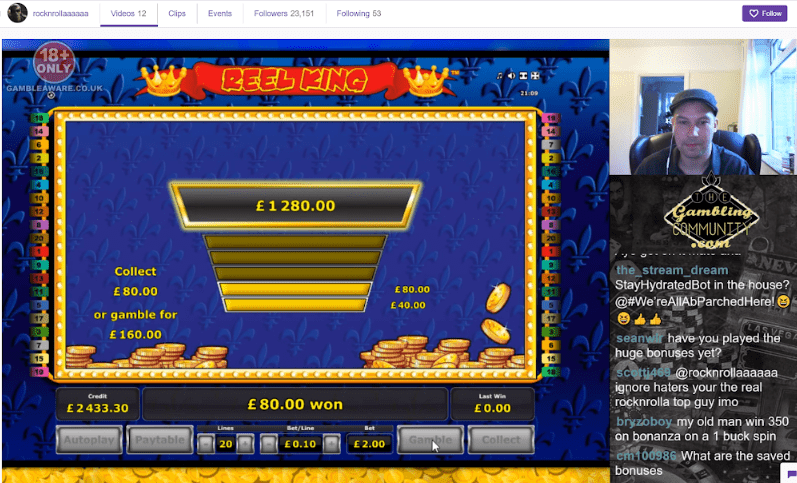 Twitch can be a lucrative business for casino streamers if they attract enough viewers. It works in a similar way to Youtube: the more popular your channel, the more money you can make from it. Advertising is one of the main revenue streams for Twitch streamers, and they have the flexibility to choose the frequency and length of ads on their videos. Streamers earn money according to how many times the ads are viewed and how many viewers click on the ads.

Most popular Twitch casino streamers also have sponsorship or advertising deals with online casinos. When you visit the channel of a big-name streamer like CasinoDaddy, for example, you see ads for a large number of UK online casinos, promoting the welcome bonuses on offer. Some streamers get paid a fixed price for this advertising, while others start earning when viewers sign up via the streamer’s link and spend money at the listed casinos.

Streamers can also make money is through donations from viewers. One way to do this is by earning Bits, which are purchased by viewers and used to “cheer” on their favourite streamers. Streamers can then earn money through the Bits they receive from viewers if their channel has enough views and follows to become a Twitch affiliate or partner. Streamers can even earn money through donations from particularly loyal fans via PayPal or platforms like Patreon.

You can rest assured that the casino streams aren’t rigged provided the streamers are playing at licensed online casinos. All virtual casino games use random number generator technology (RNG), which ensures every move is random, fair and independent. Licensing bodies, such as the UK Gambling Commission (UKGC) regulate casinos to ensure that all their games are completely fair and that the displayed odds and return to player (RTP) are accurate. All games are also tested by independent testing facilities to ensure fairness. Live dealer games also use authentic, tested casino equipment and unbiased, trained dealers to ensure games are completely fair.

If you want to double check that a streamer is playing at a licensed online casino, you can simply visit the casino in question and look for licensing body logos in the website footer. If you’re watching UK casino streamers, you can also search for licensees on the UK Gambling Commission website.

While the videos aren’t rigged, they may not always be realistic. It’s important to remember that popular streamers earn money from their content. One type of content that often attracts lots of views is streamers winning big on online slots. As any experienced casino player will tell you, the chances of actually winning significant amounts on casino games is very low. However, streamers can often afford to wager more than regular players due to the revenue they earn from streaming. As they effectively get paid to play casino games, they can wager more and play more spins than casual players.

It’s also important to note that streamers may not always be playing with real money funds. Online casinos often offer significant welcome bonuses, with some sites offering as much as £1,000 in bonus funds, facilitating an extended period of casino gameplay. There have also been accusations of casinos providing streamers with non-withdrawable funds to use on games, which streamers pretend are real funds. Some of the top streamers, like CasinoDaddy, display their deposits and withdrawals to remain transparent, which is something you can look out for if you’re concerned about dishonest streamers.

Keep in mind that the amount of time and money streamers spend playing are not feasible or advisable for the vast majority of regular casino players.

Casino streaming has fallen under scrutiny in recent months. Some commentators have claimed streams encourage irresponsible gambling and can attract minors to gambling, as there is no age restriction when it comes to accessing Twitch gambling channels.

In December 2018, the UK Gambling Commission released a statement to EuroGamer stating it was in talks with Twitch after EuroGamer claimed to have discovered two unlicensed casinos were being streamed on Twitch. EuroGamer’s investigation also raised concerns that certain streams were incentivising viewers with rewards, that some channels were stealing other streamers’ content, and that it was attracting underage people to gambling.

EuroGamer spoke to one of the hosts of CasinoDaddy, who claimed that some casinos give streamers non-withdrawable “play funds” which streamers use as a “scam” and pretend is real money. A report by Kotaku has also claimed that some casino channels use bots to fake views and improve their visibility, suggesting that these suspicious channels are used by gambling sites to generate free advertising.

Twitch regularly bans these type of bot channels, and it has never allowed casino channels to earn subscribers, which is one of the main ways other channels make money. However, it’s yet to take any significant action regarding casino and gambling categories as a whole.

The future of Twitch casino streaming

Twitch casino streaming has provided a popular online community for a large number of casino fans. If things stay as they are, its popularity is only likely to continue to grow. However, with the increasing criticism, plus the fact that the UKGC has confirmed it’s in contact with Twitch amid tightening gambling regulations in the UK, it wouldn’t be a surprise to see Twitch take action in the near future.