The festive season has been a distant memory for a while, and 2021 is in full swing. And alongside leaves beginning to grow on trees again, the birds are chirping, and days are getting longer.

But it’s not just Mother Nature in a good mood right now; some of the industry’s best online casino providers have delivered a pulsating selection of games for players to enjoy this month.

So, if you’re looking for something new to play, keep reading. In this article, we’re going to reveal the 10 best slots produced in April 2021. 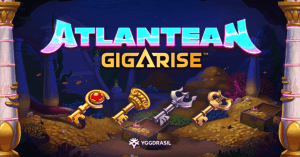 Yggdrasil Gaming is far from resting on its laurels with another intriguing new title release. Available in five languages, Atlantean Gigarise features imagery themed around Ancient Greek mythology and dreamy tunes that’ll make you feel like you’re swimming around the lost city.

This new title features a potentially lucrative progressive jackpot, along with a 5×7 in-game reel. You could, in theory, win all five jackpots in one game – though, of course, you’d need Lady Luck to be on your side.

Atlantean Gigarise features no fewer than 32,768 pay lines. Meanwhile, the return to player (RTP) rate is around 96%. You can play this slot on some of the biggest online casinos around, including LeoVegas and Casumo. 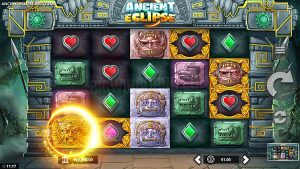 Ancient Eclipse is another title by Yggdrasil to make our list of the 10 best slots released in April 2021. Like Atlantean Gigarise, this title will transport you back in time. Unlike its counterpart, though, Ancient Eclipse focuses more on the spiritual significance of the sun and moon during olden times.

Compared to the first slot mentioned in this list, Ancient Eclipse has a slightly higher RTP – standing at 96.64%. You’ll play the game on a 5×4 reel, with unique imagery and sounds to keep you entertained.

If you get lucky, you could win over 4,500 times your original stake. The game also features 50 different pay lines and is available on the likes of 888casino plus other websites. 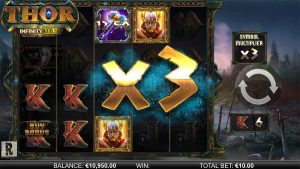 The third and final Yggdrasil online slot game to make the TopRatedCasinos UK cut for April is Thor Infinity Reels. And once again, we’re taking a journey back to a time way before you were born – this time to the vast terrains of Northern Europe.

Released on 1st April, Yggdrasil chose to start the month with a bang with this title. Players can enjoy the game on both desktop and mobile and shall spin on a 3×4 reel complete with hammers, shields, and more. 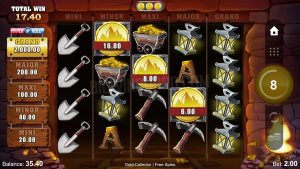 Okay, so now it’s time for us to give a different gaming provider the spotlight. Gold Collector was released by Microgaming and features a 5×4 playing interface.

Gold Collector is themed on the Gold Rush era, featuring captivating imagery from that time, including dynamites, mine workers, and carts – plus more. You could win up to 1,200 times your stake with this game, along with offering a 96.64% RTP.

One might not find the graphics as beautiful as some of the other slots on this list, but that doesn’t mean that you shouldn’t give Gold Collector a chance. And if you’re willing to do that, you can find the game on 32Red and other casino sites. 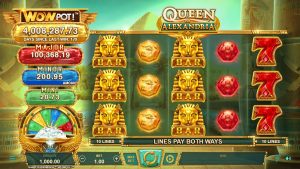 If Ancient Egypt is more your thing, you’ve got to check out Queen Alexandria WowPot. Released by Microgaming, the game features sounds and visuals that make you feel like you’re standing amongst the Pyramids of Giza – only without the intense heat.

Queen Alexandria WowPot has an RTP of 92.5%. That is quite underwhelming and far below the industry average, but the game’s progressive jackpots make it worth trying anyway. You could win up to 2,500 times what you staked with the mega jackpot, while the WowPot jackpot could land you at least £2 million(!).

The game has four reels and three rows, with play possible on both mobile and tablet devices in addition to computers. The game is available at LeoVegas, NoviBet, and other operators. 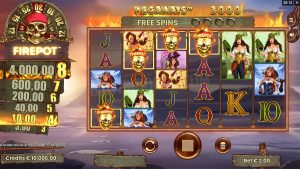 Also released by Microgaming is 8 Golden Skulls of Holly Roger, a game with no fewer than 117,649 winning combinations. If you love pirates, you’re 100% going to dig the authentic-feeling related theme for this title.

With six reels, players have the opportunity to win up to 19,000 times their original stake. The RTP is 96.86%, ranking it as one of the highest on our best slots for April 2021 list.

In addition to the reels, players can participate in a progressive jackpot. You might also win one of four different bonuses, which includes multipliers and free spins. 8 Golden Skulls of Holly Roger is available on both LeoVegas and Casino Lab, along with a range of other sites. 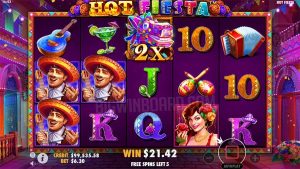 Hot Fiesta was developed by Pragmatic Play and features 25 different pay lines. Featuring five reels and three rows, this game is themed around some feel-good festivities. In fact, we’re pretty convinced that the music will make you want to get out and party yourself.

You can play Hot Fiesta at a variety of online casinos. The game has a 96.56% RTP, with multipliers and free spins both available. The game is compatible with smartphones and desktops and offers a maximum winning payout of 5,000 times your original stake. 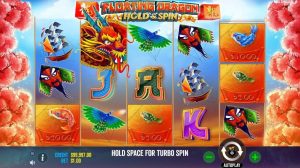 Spin Adventure: Floating Dragon is another slot from Pragmatic Play to make our list. For this one, we’re heading east and enjoying a slot with five reels and three rows – all complete with intriguing Oriental theming.

The game has a 96.71%, with high volatility. Unlike some of the other titles on our list, though, you can’t participate in a jackpot with Spin Adventure: Floating Dragon.

While no jackpot is available, you can enjoy various other bonuses. Multipliers, bonus games, and free spins are all possible – alongside numerous other things. The game has 10 pay lines and is widely available at casinos integrated with Pragmatic Play. 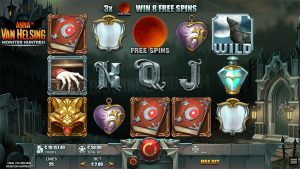 Are you looking for something horror-related? Rabcat’s Anna Van Helsing Monster Huntress is what you need. Featuring five reels and three rows, this spooky title is sure to be on the radar of many players.

Anna Van Helsing Monster Huntress has a maximum winning payout of 1,500 times the original stake, along with a 96.18% RTP and medium volatility.

With Anna Van Helsing Monster Huntress, there are 25 different ways you could possibly win. Free spins are available, along with other bonuses. 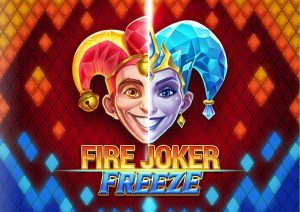 To round off our list of the best slot games released in April 2021, we’re letting Play’n GO take it away with Fire Joker Freeze. However, rest assured that we’re not messing around when we give our endorsement to this title.

Featuring a simple 3×3 interface, this game has a 96.18% RTP. The maximum payout is 1000 times the original stake, while you also have the opportunity to get re-spins.

In addition to re-spins, Fire Joker Freeze players can also make use of multipliers. There are numerous types of multipliers, each of which offers a different payout.