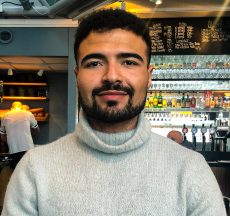 Danny studied journalism at university before becoming a writer for the gambling industry straight after graduation. He has since swapped his rainy London base for rainy, windy Copenhagen.

Danny is a content writer based in the colourful, windy and rainy Danish capital Copenhagen. He writes weekly news articles for TopRatedCasinos, and also contributes expert insight pieces looking at the state of the gambling industry.

Having grown up in London, England, Danny left home at the age of 18 to study Sports Journalism at Southampton Solent University.

While on the South Coast, he was involved in numerous sporting initiatives within the community and co-founded the media team for a local non-league side. He also helped to cover lower league football in the Southampton area and ran live blogs for the Premier League website while on work experience with LiveWire Sport.

Danny’s writing took more of a betting-related focus towards the end of his degree. He became a content marketing executive for Skrill and NETELLER after landing a permanent job at Paysafe, covering EURO 2016 and the start of the 2016-17 Premier League season. Later that year, he was promoted to the copywriter role after the company acquired gambling affiliate platform Income Access.

After two enjoyable years working at Canary Wharf, Danny started writing for emerchantpay and continued covering betting-related content alongside e-commerce and travel. He soon took the leap into freelance writing, mainly to work on his own terms and move further north.

Danny enjoys strategy-based casino games, such as blackjack. He is also an expert in online casino payments.

Besides TopRatedCasinos, he has also contributed to other major industry publications such as EGR Magazine.

Away from writing, Danny is a keen photographer. He spends his weekends documenting his life in Scandinavia through pictures, with a particular interest in street and landscape photography. Danny also enjoys challenging himself through learning new languages and engaging in vigorous exercise routines.