February has proven a fun-filled month for online slots fans, with loads of fresh new titles released from a range of top developers. With high variance games and some high paying slots released this month, there’s plenty of fun on offer. We’ve picked out our top 5 best new slots for February 2020 and written reviews for each, so that you can easily check out what the best new releases have to offer. Let’s get to it.

Master Joker is one of the most innovative titles released by renowned developer Pragmatic Play. This video slot has the usual 5 rows but just 1 reel which means that symbols can pay anywhere on the reels and don’t have to line up consecutively. There is a wild symbol which means you can have two winning combos on the same spin if you land the wild in the middle and matching symbols either side.

This slot’s most lucrative feature is the Multiplier Wheel feature. This is activated whenever you land a wild on a winning spin and awards a multiplier that can range from 2x to a massive 100x! The huge top prize of 10,000x your stake is won when you fill the reels with four 7s, the wild and activate the 100x multiplier. With an RTP of 96.46%, this is an unusual, highly volatile slot which is definitely worth a try if you like titles that offer something different. 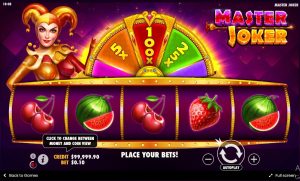 Venture to the depths of the ocean with this February release from NetEnt that has some fun bonus features that make for exciting gameplay. The treasure chest symbol is the game’s scatter and landing three of them along the reels activates a free spins round with five levels.

The free spins round has increasing multipliers, starting at 3x and potentially going all the way up to 12x. Landing the 1×1 wild adds another two spins, and also fills in part of the Level Meter. Filling up the Meter progresses you through the free spins level, and if you make it all the way to level five, you’ll receive a side bonus of 100x your stake! Get enough wilds and you can land 102 free spins in total.

As with most NetEnt slots, this game’s fantastic graphics help it stand out, with images and animations of ghostly looking sea creatures. A medium volatility slot with an RTP of 95% and a max win potential of 1,200x your stake, there’s plenty to enjoy with this new NetEnt slot. 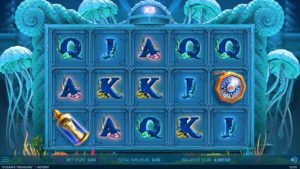 Developed by Crazy Tooth Studios in partnership with Microgaming, this is an innovative slot that offers up stunning visuals and thrilling gameplay. The first thing you need to know is that this game uses the new Continuwin game engine. This means that the game starts off with just the 1 reel, but another reel is added, along with a respin, every time you land a 7, up to a maximum of 7 reels.

This makes for unique gameplay that offers something different from most regular slots. There are only three symbols in total – the 7, the Bar and the wild, which substitutes Bars for 7s and is also a 2x multiplier. Lining up seven 7s across the single reel will land you the jackpot of 25,000x your stake. A highly volatile slot that mixes simple yet creative game mechanics, this definitely one to try out. 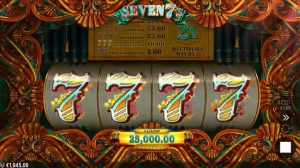 Play’N GO is one of the most prolific releasors of new slots, and Fortunes of Ali Babe is another fun game added to its library in February 2020. This title transports you into the world of the famous folk tale, with vibrant graphics and engaging gameplay. The Morgiana symbol is this game’s scatter and activates the Den of Thieves Bonus feature when it appears on the first and fifth reel.

The bonus round is a picking game with five levels – picking pots with instant prizes will send you to the next level. The prizes can either be cash wins or free spins, and the Ali Babe wild is present on every free spin. There’s also the Thieves wild, which triggers re-spins and moves towards the Ali Baba wild during re-spins, leaving more wilds in its path. The max avaialble win is 9,948x your stake, so there’s plenty of fun to be had with this 96.89% RTP slot. 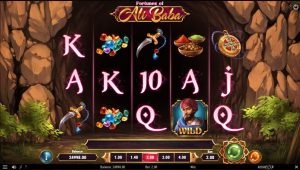 Brazil Bomba is one of several February releases from Yggdrasil and is one of our favourite new slots from this month. This game has a carnival atmosphere and promises plenty of fun, as well as the stunning visuals that are characteristic of Yggdrasil slots. It has an unusual 8 reel, 6 row format and is Yggdrasil’s first cluster pays slot, operating with an RTP of 96.30%.

The Dropdown wins feature means that winning combinations are replaced by new symbols continuously until no more wins are formed. There’s also the Bomb symbol which explodes to remove up to 16 symbols on the reels. Every Dropdown win or Bomb symbol activates a multiplier for the next Dropdown which increases by 1 each time for potentially lucrative wins. Finally, scatter symbols can reward between 5 and 20 free spins, so this is an action-packed slot that brings the fun of the Rio carnival to your online casino. 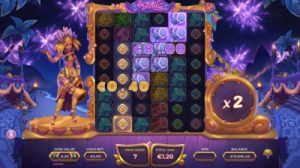 Other new slots released in February

These top slots are just a few of the many slots launched in February. Other new games include: