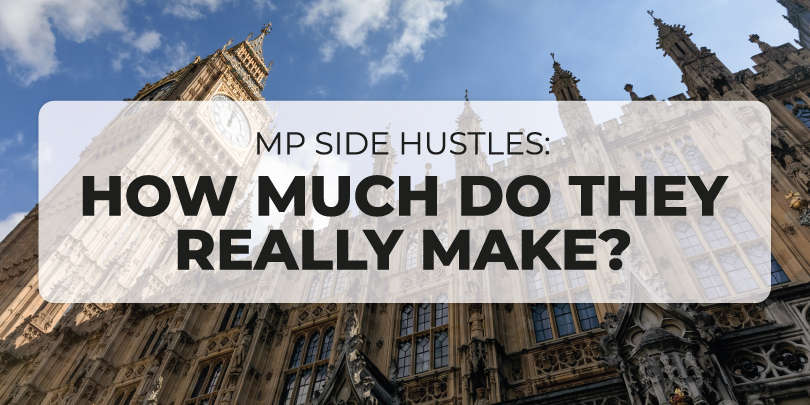 After the Owen Paterson lobbying scandal, there has been more attention than ever on the second jobs of UK MPs and interest in how much they really make from their side hustles.

To find out which MPs have been earning the most outside of their parliamentary roles, TopRatedCasinos analysed the latest data from the UK Parliament to find out which members earned the most in employment opportunities between 2019 and 2022.

Which MPs Earn the Most From Employment Outside of Their Parliamentary Role? 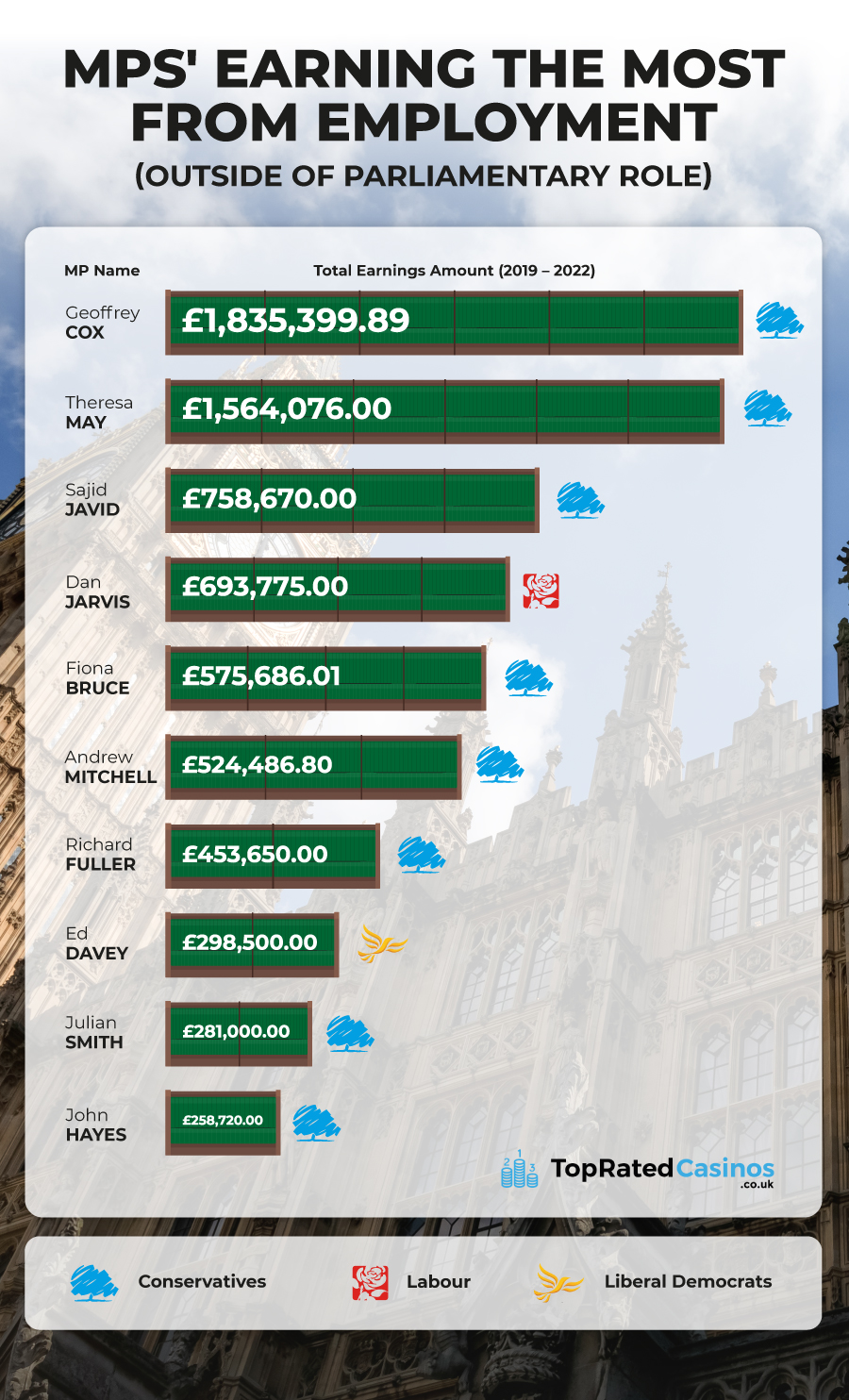 Geoffrey Cox, who represents the Torridge and West Devon constituency, is the MP who makes the most money outside of their parliamentary role. The qualified barrister has managed to bank over £1.8 million from outside employment. Withers LLP, which paid him £703,311 for 633 hours of work between 25th January and 31st December 2021, was one of his most notable clients as he works as a consultant global counsel for the law firm.

In second place is Theresa May. The former prime minister has earned a substantial sum of £1,564,076 from work outside of her parliamentary duties as a member of the Maidenhead constituency. It seems she is quite a talker, as all of her external income comes from speaking engagements — Telmex Foundation paid her £46,750 for a six-hour virtual speech, and the Pension Real Estate Association gave her £38,220 for a four-hour one.

The Secretary of State for Health and Social Care, Sajid Javid, is in third place. During his tenure as a member of the Bromsgrove Constituency Assembly, he received a financial injection of £758,670 from work conducted as Managing Director of Deutsche Bank. Other banks have clearly been interested in his expertise too, as evidenced by HSBC’s payment of £30,000 for two speeches totalling four hours.

Dan Jarvis (£693,775) and Fiona Bruce (£575,686) are among the other MPs earning more than £500,000 from employment outside of their parliamentary roles, ranking respectively fourth and fifth.

The only appearance from a Liberal Democrat goes to Ed Davey who bagged £298,500 from jobs outside of his role in Parliament. This total includes the £5,000 he receives a month working as a consultant on political issues to Herbert Smith Freehills.

Who is Each Party’s Highest-Earning MP?

Out of all of the political parties in the UK, we identified the MP who earns the most from their side hustles. Those who fell outside of the top 20 highest-earning MPs outside of their parliamentary role include John Finucane, a member of the Sinn Fein party. A large chunk of his £168,192 earnings from 2019 to 2022 come from working as a Director of Finucane Toner Ltd (solicitors), where he receives £4,672 a month.

The Social Democratic and Labour party has some of the lowest-earning MPs when looking at their income outside of their parliamentary roles. Out of these, the most well-paid for their side jobs is Claire Hanna with £320 of earnings.

Conservative Cabinet MPs Making the Most From Side Hustles

Sajid Javid and Nadine Dorries are making the most from side hustles out of the Conservative cabinet. Earning £758,670 and £126,602 respectively, Nadine’s wages come from working as an author for Head of Zeus Publishing.

In addition to his parliamentary duties, Boris Johnson earned over £30,629 from outside work but is only the third highest-earning Conservative. His only external employment income has come from royalties he has been paid for books he has written and published.

Labour Cabinet MPs Making the Most Outside of Their Parliamentary Role

David Lammy and Ed Miliband are the two highest-earning Labour cabinet members when it comes to jobs outside of their parliamentary duties. They have made £108,711 and £79,235 respectively, with Lammy’s extra wealth coming from multiple speaking duties and Miliband’s from sitting as a Director of Political Quarterly Publishing Company.

Daniel Bennett, From TopRatedCasinos, Commented on the Research:

“Given the economic uncertainty and ever-increasing cost of living, MPs have come under huge fire for receiving a pay rise of £2,212 to their already generous parliamentary salary of £81,932. As a lot of people battle price hikes for food, petrol, and energy amid little to no pay rise, it signifies the disparity between MPs and the people they are appointed to serve.

“This disparity is further heightened when assessing the obscure sums MPs are pocketing from jobs undertaken outside of their parliamentary role. Whilst some MPs are making significantly more than others when it comes to this front, it does bring into disrepute the integrity and righteousness of MPs in these very turbulent times for normal citizens”.

Out of the 319 MPs found to be making money from employment outside their role as a member of Parliament, 187 are Conservatives, 88 are members of the Labour party, and 23 are SNP MPs.

Outside of the top three are the Liberal Democrats with eight, Democratic Unionists with four, three from the Independent party, two Alba candidates, one Green MP, one from Social Democratic and Labour, one from Plaid Cymru and one MP from Sinn Fein.

Lastly, let’s have a look to see what these MPs have made collectively from their second jobs: