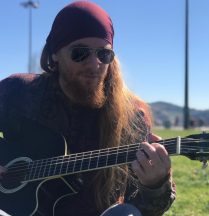 Andy is a contributor at TopRatedCasinos.co.uk, and a seasoned veteran of the online gambling space. While producing expert reviews, guides, and more for the site, he is committed to presenting facts in a fair and unbiased way while promoting responsible gambling practices every step of the way.

Andy is based in Portugal, having escaped the rain-drenched world of Manchester for the sunnier climes of Lisbon –– something his fair skin has yet to forgive him for.
Andy’s writing career started as a contributor for a bilingual newspaper in Spain before moving to the UK Midlands and starting his own music magazine. During this time, he also earned a bachelor’s degree in Creative Writing and Journalism from De Montfort University.
Andy has been working as a writer in the iGaming industry for the better part of a decade, testing and reviewing thousands of games and casino sites, as well as writing numerous guides and news articles. Having been published on a variety of high-profile iGaming sites, Andy primarily specialises in slots and live casino games while also regularly writing on sports betting, fantasy sports, cryptocurrency, and financial trading.
Having initially stumbled into gambling writing somewhat unintentionally, Andy quickly became enamoured with the constantly evolving industry. As interested by the nuances of regulation as he is by the high-octane world of casino games, it’s fair to say that his first iGaming job was a very happy accident!
Committed to an unbiased, honest, player-first approach to writing, Andy was delighted to join a team of like-minded individuals at TopRatedCasinos.co.uk.
As well as music writing, Andy has been learning guitar for 30 years, playing in bands across the UK. His music tastes are best described as eclectic, with Americana, grime, and hard rock often appearing side by side on playlists. While Andy is the first to admit his listening habits have softened as he’s got older, his hair still pays tribute to his hardcore metal roots!
Andy can often be found cheering (quietly) for his much-loved Phoenix Suns in the early hours of the morning, and he admits this has become substantially less depressing recently.