The Most Name-Dropped Sports Stars in Music History

Some of the world’s most famous sporting legends have gained the attention of millions across sporting events and social media, but their fame doesn’t stop there. Our newest study can reveal that sports stars have featured heavily in music lyrics over the years.

To find out which of our favourite footballers, golfers, and boxers have been name-dropped the most in music history, we analysed thousands of lyrics by the likes of Drake, Jay-Z, Kendrick Lamar, Kanye West, and more!

The 20 Most Name-Dropped Sports Stars in Music 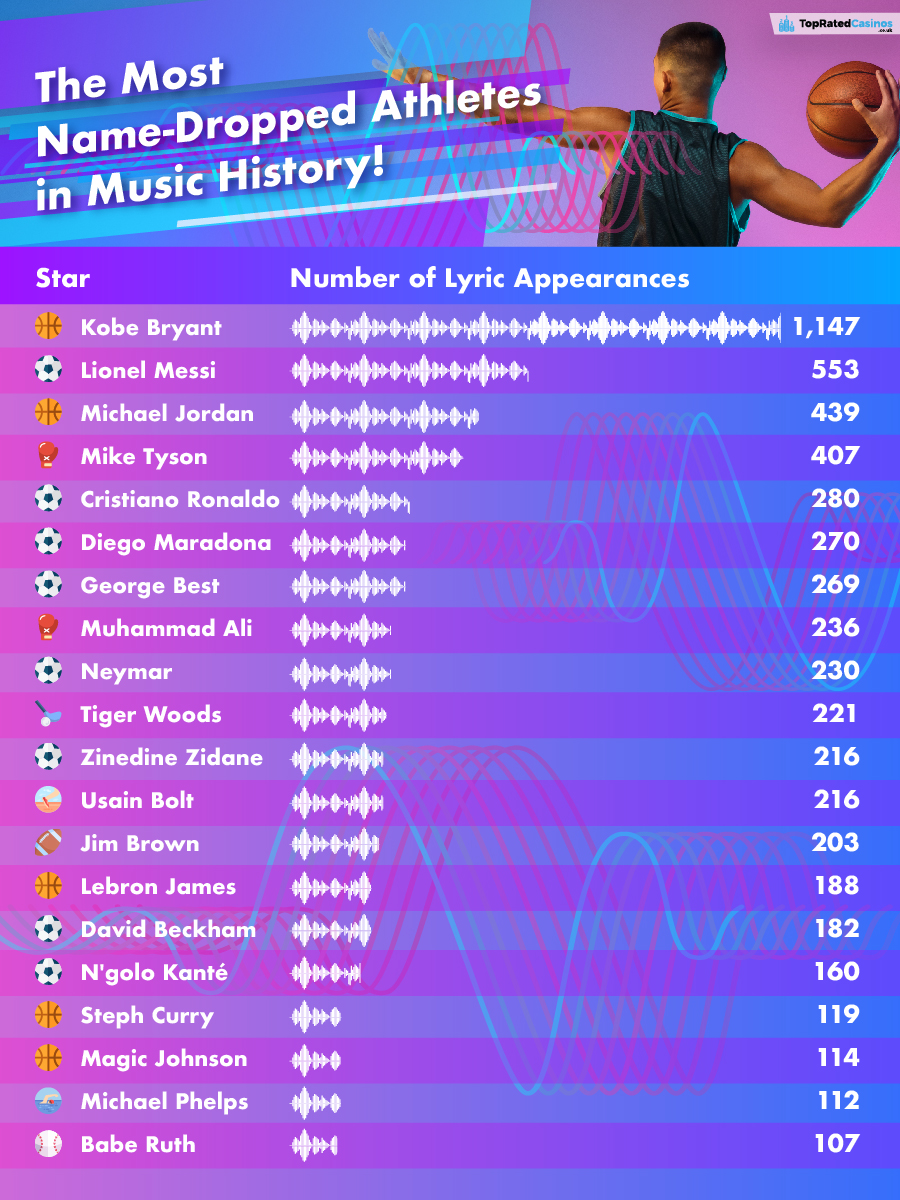 The sportsperson name-dropped the most in music lyrics is the late Kobe Bryant, the world-renowned basketball player commonly considered as one of the greatest to ever play the game. In total, Bryant made 1,147 appearances in song lyrics, including ‘The Heart Pt. 2’ by Kendrick Lamar, and ‘Kobe Bryant’ by Lil’ Wayne which includes the line: “There’s nothing that Kobe Bryant can’t do”.

Famous footballer Lionel Messi came in second, as his name has been mentioned 553 times in music history, including Justin Bieber’s song ‘Holy’ which features the lyrics: “Get messy, go lefty, like Lionel Messi”. Although impressive, Messi has been name-dropped 594 times fewer than Kobe Bryant in first place, emphasising just how influential Kobe was both on and off the court.

Michael Jordan, the basketball player, has been mentioned 439 times by artists, ranking him as the third most name-dropped sports stars in our study. Jordan’s name was mentioned in ‘Encore’ by Jay-Z, and Drake’s ‘Over My Dead Body’, featuring the lyrics: “Don’t Michael Jordan still got his hoop earring in?”

It was Mike Tyson that placed in fourth, with the boxer boasting 407 mentions in music lyrics over the years. Meanwhile the footballer Cristiano Ronaldo was the fifth most name-dropped sports star and has been mentioned 280 times in music history, including in the hit song ‘Blue Tint’ by the Canadian rapper, Drake.

Football legend Diego Maradona has received 270 mentions in song lyrics, making him the sixth most name-dropped sports star. Our analysis found that Maradona has been featured in the song ‘La Mano de Dios’ (‘The Hand of God’) by fellow Argentine Rodrigo Bueno, referring to the player’s controversial 1986 FIFA World Cup goal, and ‘La Vida Tombola’ by the Spanish singer Manu Chao.

Fellow footballer George Best, regarded as one of the greatest football players of all time, followed closely behind, falling short of sixth place by a single mention (269). Best has featured in many songs over the years, including ‘Oh My God’ by Professor Green, and ‘Through the Night’ by grime artist Bugzy Malone who raps the following lyrics: “But I’ll start taking shots like George Best”.

Muhammad Ali, the boxing great, ranked as the eighth most name-dropped sports star in the world of music. Ali has had 236 mentions in song lyrics, including Will Smith’s ‘Gettin’ Jiggy Wit It’, and ‘Built Like Me’ by Migos which featured the lyrics: “”Float like a butterfly, sting like a bee, that’s the late great words of Muhammad Ali”.

It was footballer, Neymar, that followed, with 230 mentions in lyrics overall – the ninth highest among the sports stars studied. ‘Next Up?’ by S1 x Sav12 features the Brazilian footballer in the following lyrics: “Stepped on the field with tekkers, mummy should have named me Neymar”.

Placing as the tenth most name-dropped golfer in music history, receiving 221 appearances in song lyrics, is the golfer Tiger Woods. Perhaps one of the most well-known songs featuring the golfer is ‘Medicine Man’ by Dr. Dre, featuring Eminem, Candice Pillay and Anderson .Paak, including the lyrics: “Prob’ly reminded you of the first time you saw Tiger Woods golf”.

The 10 Most Name-Dropped Sports

Eager to find out more about which sporting legends have received the most lyrical appearances over the years in total, we tallied up the number of lyrical mentions per sport.

Our analysis found that football stars have the highest number of appearances in lyrics, receiving an impressive 2,738 mentions in song lyrics combined.

The full results are as follows:

The Most Name-Dropped Sports Stars Per Sport

The Most Name-Dropped Footballers

The Most Name-Dropped American Footballers

The Most Name-Dropped Basketballers

The Most Name-Dropped Boxers

The Most Name-Dropped Athletes

The Most Name-Dropped Tennis Players

The Most Name-Dropped F1 Drivers

The Most Name-Dropped Baseballers

The Most Name-Dropped Golfers

The Most Name-Dropped Swimmers